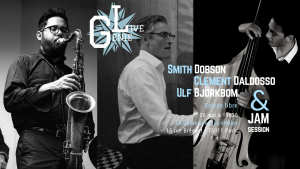 Smith Dobson is coming from United States to propose three wonderful sets of 45minutes of his compositions.

His music is influenced by the great swing, bebop, and avant-garde jazz musicians of the 20th century. He is also influenced by classical composers like Franz Schubert and Bach.

Don’t miss him for his first performance in Paris Bastille.